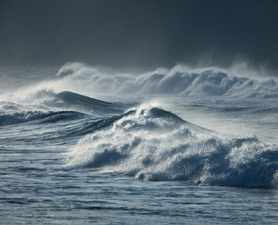 My essay on how “seeing the oceans” has changed over time was published in the June 2014 issue of Isis. The title is “Seeing the Oceans in the Shadow of Bergen Values.” It begins with a discussion of how the oceanographer Roger Revelle is lionized today because of his role collecting data on the carbon cycle, and for having inspired many people (including Al Gore). As I say in the essay, “historians examining documents from 1950s oceanography will look in vain for this hero of the environmental movement. Oceanographers of that era were more likely to be found helping to blow up atolls in the Pacific than trying to save the earth.”

There are many ways of understanding the history of oceanography, and today we may be trying to a fit the proverbial square peg into the round hole if we assume there is only one narrative (the environmental one). A more recognizable one during that era, influenced by the so-called Bergen school, emphasized dynamic oceanography and often was at odds with claims coming from those who emphasized long-term change. And yet the narrative of environmental change, so crucial to the earth sciences today, is compelling too.

How can we join the narrative of the triumph of mathematical, dynamic oceanography with the environmental narrative? For a start, read the essay.