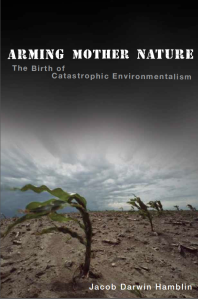 After editing a couple of dozen H-Environment roundtables myself, it was fun to have one of my own books, Arming Mother Nature, as the subject of one, this time guest-edited by Michael Egan of McMaster University.  It was a great opportunity to engage directly with commentators.  One of them, Dolly Jørgensen, recently featured my book on Environmental Humanities Book Chat.  The other participants were Libby Robin and Kristine Harper.  Thanks to everyone for giving my book your time and attention, and helping me to think through the issues!

Below is Michael Egan’s introduction.  The full roundtable, including my response, can be accessed by clicking here.

“H-Environment and its readership owe Jacob Hamblin a great debt for his energetic and thoughtful curation of the list’s roundtable reviews over the past several years. They are a stimulating boon to the field, and provide a unique venue for engaging with literature and the ideas that drive our collective work. This kind of editorship is often a thankless task, no less when one’s own work should be reviewed in this forum. Hamblin was understandably reluctant to include his work in the series, and it took more than a little persuasion (over drinks at the ASEH meeting in Toronto) for him to allow me to guest-edit this edition.

“Given the growing interest in the Anthropocene as an organizing tool for reading recent global environmental history, Arming Mother Nature: The Birth of Catastrophic Environmentalism warrants our careful consideration. My own growing interest in disaster science and methods of understanding and anticipating environmental vulnerabilities meant I was anxious to study this work. During the Winter 2014, I also had the opportunity to assign Arming Mother Nature in an undergraduate course titled “The History of the Future.” As Dolly Jørgensen notes in her commentary, Arming Mother Nature is a book about imagining. Hamblin’s book served the course well and highlighted not just how historical actors acted, but also how they imagined and anticipated future scenarios. Not just what they did, but also what they thought they were doing. Vulnerability, as Hamblin’s actors understood it, was a future tense idea, not dissimilar other elements of our current environmental lexicon, such as sustainability and resilience. That the book succeeded in engaging an undergraduate classroom is also, I think, testament to Hamblin’s strength as a narrator, and it goes some distance in explaining Arming Mother Nature’s success in reaching audiences beyond the strictly academic. The book is filled with anecdotal snippets that come together to tell a fascinating story about the emergence of Cold War environmental catastrophism.

“Which is to say Arming Mother Nature rewards inquiries from a variety of different perspectives. It offers intriguing challenges to and (at the same time) affirmations of James C. Scott’s ideas about the state’s role in changes in the environment. Scholars wanting to explore questions pertaining to the Anthropocene might also find fuel for discussion. The scales of technological (and imaginative) capacity present in these pages would be an awesome tribute to the power of human ingenuity if it weren’t for the devastating means and ends that inspired them. Similarly, Hamblin taps into the expanding literature on militarization and environmental history, and reminds us that war and environment intersect beyond the theatre of battle.

“Inasmuch as Hamblin and this book wear multiple intellectual hats, it seemed appropriate to recruit reviewers who represented some coverage of this breadth. Because of her expertise in the history of science and meteorology—not least her current interest in weather control as a state tool—I asked Kristine Harper to provide a commentary from that perspective. Libby Robin has been leading a large-scale project on the history of future natures, and I thought the aforementioned connection with past planning and anticipating, especially as it related to global change, warranted some consideration. And Dolly Jørgensen has been spearheading new initiatives between environmental history and environmental humanities. Combined with her background in the relationships between environmental history and the history of technology, her perspective on Arming Mother Nature allowed for another quite distinct analysis.

“Before relinquishing the conch, I should like to echo Hamblin’s traditional thanks to the roundtable contributors for their efforts in submitting their reviews (each in an especially timely manner). As ever, H-Environment Roundtable Reviews is an open-access forum and is available to scholars and non-scholars alike, around the world, free of charge. Please circulate.”

Above introduction is from Michael Egan; see full roundtable with my response here.