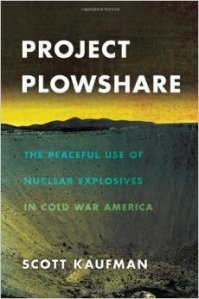 After the Limited Nuclear Test Ban Treaty of 1963, Project Plowshare—the idea of engineering (building canals, creating harbors, cutting paths for roads and railways, and freeing natural gas reserves trapped underground) with peaceful nuclear explosions (PNES)—might have died a natural death. Instead, with atmospheric testing banned, the Atomic Energy Commission (AEC) simply took the explosions underground and nursed the hope that the treaty would be revised or reinterpreted. AEC scientists had many ambitious ideas for Project Plowshare, including digging a new canal in Panama, excavating a harbor in Australia, and what would today be called “nuclear fracking”—releasing natural gas by fracturing rock deep within the earth.

Scott Kaufman’s book on Project Plowshare is a tale of atomic bureaucracy, written in an evenhanded style, in which the AEC tried against all odds to keep the program alive. Although the nuclear physicist Edward Teller is typically at the center of this tale, having advocated for nuclear excavation to build a harbor in Alaska, in Kaufman’s hands the story soon shifts to Glenn T. Seaborg, who chaired the AEC for a decade in the 1960s. Seaborg tried to convince three different presidents to interpret the Limited Nuclear Test Ban Treaty to allow blasts that could vent a bit of radioactivity. Seaborg kept the idea of the isthmian canal alive, and Seaborg pinned hopes on the Australians. He was seemingly tireless in this pursuit, even though his idea flew in the face of obvious diplomatic barriers.

At times, Kaufman portrays Project Plowshare advocates as they would have characterized themselves: they had visions of a “wonderful world” (p. 147), a “better world for all” (p. 195), and they attempted “to move humankind down the path of progress while simultaneously protecting U.S. security” (p. 226). He misses the opportunity to make a definitive statement about whether Teller and others really hoped to use peaceful nuclear explosions to extend the life of weapons testing. He does acknowledge that leverage over Panama was a motivation for U.S. interest in a nuclear-blasted isthmian canal. He also suggests that Americans turned a blind eye to Soviet treaty breaches to leave room for programs under Project Plowshare that might also have violated it. He mentions misrepresentations, too—as when Seaborg grossly understated how many damage claims had been filed after an important test of nuclear fracking.

Kaufman does not engage the changing politics of nuclear proliferation in the aftermath of India’s first nuclear weapon test in 1974. Although he cites a 1965 warning from a U.S. government nonproliferation task force that Project Plowshare would encourage countries such as India to take an interest in nuclear weapons, he does not show how the AEC and other project defenders reacted to the test.

Kaufman’s informative book makes clear that Project Plowshare was hindered most by the test ban. But it was a slow, expensive death marked by cost overruns, repeated failures to anticipate test effects accurately, and a massive public crisis of confidence in the AEC by the mid-1970s. Scholars will find Project Plowshare a useful guide to the national and international politics of peaceful nuclear explosions.