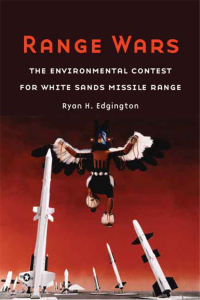 Just west of Alamogordo, New Mexico, the site of the first atomic test in 1945, there is an enormous stretch of land that is off-limits to civilians, known as White Sands Missile Range. Since the Second World War, White Sands has been a notorious military proving ground. Not limited to any one armed service, the desert landscape is a site for atmospheric studies and serves as a testing site for ordnance, novel weapons systems, and other projects for the Department of Defense, NASA, private contractors, and other government agencies. Though it easily qualifies as one of the most milita- rized landscapes in the United States, it also has been the site of community battles over land and divisive controversies about ecology and wildlife.

In Range Wars, Ryan Edgington provides the first explicitly environmental history of White Sands, and any reader will immediately recognize its significance. Edgington provides not a history of weapons but an analysis of the site itself as a contested place that was altered by explosions, that became an experimental wildlife zone, and that galvanized communities to speak out against federal control of lands. Edgington uses the notion of contestation to highlight several struggles, and the result is a history that does more to compli- cate our narratives than to provide a clear counterpoint to them. “A myriad of factions,” he notes, “remade White Sands to fit their political ideologies, economic needs, and environ- mental ethics” [14]. Edgington wants to disrupt convenient understandings of White Sands, to show the variety of actors and unexpected alliances that have marked its history.

Perhaps the most novel contribution in Range Wars is the extended discussion of wildlife introduction. Scholarship on militarized landscapes typically points to the flora and fauna that flourish when humans suddenly are barred. This is true not only of demilitarized zones like the one dividing North and South Korea but also of areas that we might consid- er wastelands, such as Chernobyl. White Sands was no excep- tion to this rule, and the removal of humans and ranch cattle left ecological space for several species. Antelope roamed White Sands in relative abandon, and as Edgington points out, all branches of the military “have found themselves managing a myriad of animal species” [119]. In addition, the climatic similarity of New Mexico to South Africa’s Kalahari desert inspired the New Mexico Department of Game and Fish to introduce the oryx (a kind of antelope), hoping to lure hunters with the promise of an authentic African safari. With its limit- ed public access, White Sands provided an ideal place for stocking big game. Scientists were drawn in as well by the opportunity to study and experiment on the animals in a habi- tat relatively free from human interference. As Edgington notes, “exotic game boosters, hunters, and scientists trans- formed an apparatus of the American Cold War defense indus- try” into a place for testing a species that was just as foreign to New Mexico as the weapons had been. Yet in time, the oryx population boomed, not only outcompeting other species for food but also carrying diseases harmful to deer and sheep, leaving people deeply divided about hunting, tourism, and the ecological function of White Sands.

A more familiar conflict discussed in Range Wars con- cerned the New Mexican ranchers who tried in vain to have pieces of the federal test range returned to the original owners and their families. At first blush, this might seem like an obvi- ous losing battle, but the ranchers had powerful allies. They “were not a fringe group at the margins of Cold War America,” Edgington writes. The bond between the White Sands Missile Range Ranchers, as they called themselves, and their congres- sional representatives was emblematic of a larger political struggle about western lands. By the mid-1970s, politicians in several Southwestern states formed what came to known as the “Sagebrush Rebellion,” an anti-federal coalition that clam- ored for state rather than federal control of public lands. Many of these so-called rebels promoted “Wise Use,” a catch-all term that opposed federal management and favored tradition- al land uses such as farming, ranching, mining, and logging, aimed at economic growth. The White Sands ranchers tried to benefit from the political pressure exerted by Sagebrush rebels, to have the land returned to them. But when one of their advocates, Ronald Reagan, became president, they were disappointed. Although Reagan continued to rail against big government, to advocate for state control, and to dismantle regulatory infrastructure at the federal level, he also was a staunch supporter of the defense establishment. As Edgington makes clear, that meant White Sands was never going to be returned to the ranchers. “Property owners displaced at White Sands faced a fundamental contradiction of Reagan conser- vatism,” he argues, namely “a support for Wise Use ideas but never before national security” [162].

Throughout the book, Edgington seeks to remind us that White Sands was not the “black space” that we imagine it was. Its boundaries were porous, certainly for the wildlife and occasional guided safaris, but also for some of the scientific studies. For example, White Sands rockets captured the first images of the planet’s curvature, and these images were made available to public audiences on the pages of National Geographic in 1950. The porosity of boundaries was some- times unintentional, as when the occasional errant missile brought White Sands military experiments into public conver- sation in the United States and neighboring Mexico. Given Edgington’s desire to explore public engagement with White Sands, I did wonder—where are the aliens? Surely a book discussing the competing identities of a particular place, as missile range, as habitat, or as ranchland, might have explored the connection between White Sands and the UFO mecca in nearby Roswell. It is a minor quibble, but it would have served Edgington’s point that “secured from public access, [White Sands] could yet be observed and reimagined” to suit a variety of needs and desires [117]. Edgington does make that point very well in other ways, however, from atomic tourism to so-called authentic safaris. Range Wars takes an enormous step in reconnecting this militarized landscape to scholarship in environmental history and the cold war era generally.