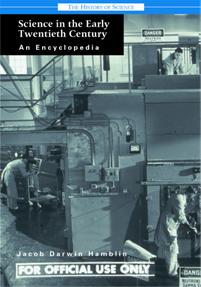 Praise for Science in the Early Twentieth Century: An Encyclopedia (ABC-CLIO, 2005)
“This is a useful, instructive, and entertaining reference for libraries serving high school through university audiences, and for public libraries.” – American Reference Books Annual

Designed for students wishing for more than just a scientific survey, this book was written as an introduction to the social and conceptual dimensions of science and technology in the first half of the twentieth century.

An introductory resource on the history of science from 1900 to 1950 examining the dynamic between science and the social, political, and cultural forces of the era.

Science in the early 20th century was replete with ironies. Nazi Germany’s persecution of the Jews led many of Europe’s best physicists to flee to America, where they helped develop the atomic bomb; the Soviet Union, while publicly trumpeting its scientific achievements, threw its best geneticists in jail when they dared to question state-sponsored charlatans.

Though many books have highlighted the great scientific discoveries of the early 1900s, few have tackled the wider context in which these milestones were achieved. Science in the Early Twentieth Century discusses a range of subjects from quantum physics to penicillin and more, including all the major scientific developments of the period, detailing not only the scientists and their work, but also the social and political forces that dominated the scientific agenda.

Over 200 essays analyze scientific discoveries and personalities of the period, including such scientific giants as Albert Einstein and Marie Curie. Placing science firmly within its cultural context, this thoroughly researched, accessible resource takes a uniquely interdisciplinary approach, making it an invaluable text for scientists, educators, students, and the general reader.

Features
• Over 200 essays on the key scientific discoveries, thinkers, practices, and political and cultural influences of the period
• Over 80 photographs of important scientists and events, including Marie Curie at work in the laboratory where she isolated pure Radium, Clarence Darrow at the Scopes evolution trial in July 1925, and the wrecked framework of the Museum of Science and Industry in Hiroshima shortly after the dropping of the first atomic bomb

Highlights
• Reviews developments across a broad range of scientific disciplines, exploring the complex interplay among science, politics, religion, and art
• Traces the early debates on matters of current controversy—from experiments on humans to the development of weapons of mass destruction
• Highlights the discoveries of women scientists during the period

OSU Downwinders Project Information about oral histories, workshops, and research about our NSF-supported historical work on the Hanford Environmental Dose Reconstruction Project and other Downwinders-related topics.